The AIRVISOR air deflector is a new, easy to install or remove, system which allows local control over the airflow for individual building occupants. AIRVISOR can help achieve the desired end-product of HVAC systems: the comfort, health and satisfaction of building occupants.

AIRVISOR consists of a flexible cover that attaches to the exterior of a diffuser allowing for directional adjustment of the airflow from the diffuser without affecting the overall airflow volume. AIRVISOR consists of a flexible cover that is secured to one of the cones using a spring hook and two tabs. To remove, a button is depressed to release the hook from the cone.

AIRVISOR is designed to complementary fit most OEM diffusers. If a typical diffuser is viewed from directly underneath, then the diffuser may be considered to have four directional quadrants out of which air flows. Those quadrants are effectively directed toward the north, the south, the east and the west. Under normal operating conditions, air radiates outwardly and downwardly from all four quadrants of the diffuser.

AIRVISOR is designed to deflect airflow from a selected quadrant to the remaining quadrants. When installed, AIRVISOR blocks the openings in that quadrant and prevents air from flowing out of the openings. The AIRVISOR can be quickly and easily installed and removed and thereby allows for rapid adjustment of the airflow in any one or multiple directions from the diffuser. The airflow out of the remaining unblocked quadrants is increased proportionately, but the overall volume of air flowing from the diffuser is not reduced. Consequently, the airflow at a particular workstation, for example, may be effectively blocked, but the overall air balancing of the building is relatively unaffected.

At left a Balometer is used to measure overall air volume from a diffuser. The air volume from the diffuser is virtually unchanged as 1, 2, then 3 AIRVISORS are installed.

It is always advisable to consult your certified HVAC professional before adjusting the air flow volume of diffuser.

Air velocity is one of the main determinants of human thermal comfort. The most common ceiling diffusers do not allow for personalization of airflow for nearby occupants. Drafts are the most annoying climatic factor at many workplaces and are assumed to reduce satisfaction with work, to impair performance and perhaps even health.

Most industrial and commercial buildings utilize 24'' x 24'' square ceiling vents commonly referred to as Fix Pattern Square Cone Diffusers (diffusers), that are commonly mounted on drywall or T-bar ceilings. The diffusers are standardized to fit 24'' T-bar ceiling and either have three or four cones through which heated or cooled air is introduced into the room. The diffuser  causes the air to flow outwardly equally in all directions and through 360 degrees from the cones. Initially, the air is blown along the ceiling and eventually drops into the room at a distance from the diffuser.

When employees are finally settled into the premises, they may discover that they have hot or cold air (drafts) blowing directly onto them from vents / diffusers located in close proximity to their desks. This situation may lead to much discomfort for employees who may try to minimize their discomfort by taping cardboard or some other material over the cones. Another possible solution is to adjust the damper to reduce the overall flow of air through the diffuser. This adjustment of the damper does not affect the direction of the air flow, but instead affects the volume of air flowing from the diffuser. This air volume  reduction may make life more pleasant for the employee sitting close to the diffuser, but it can also have negative implications for the overall air balance of the building. 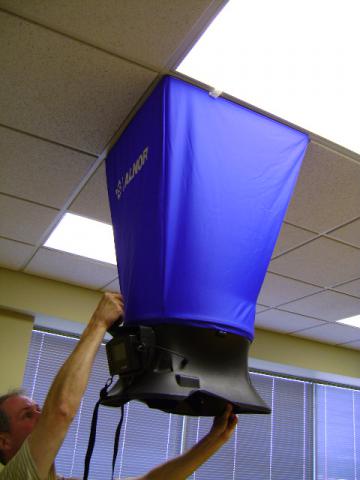 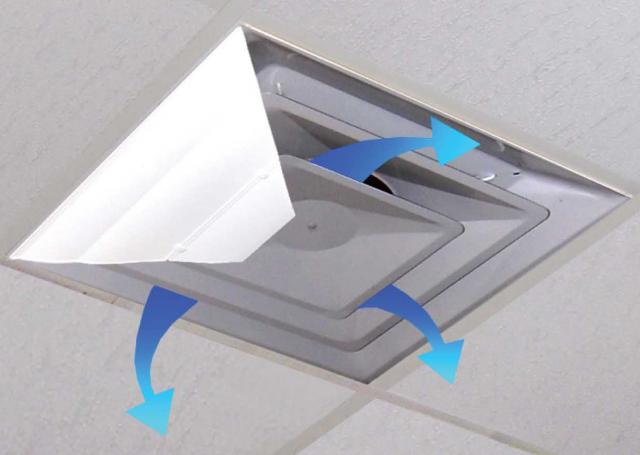